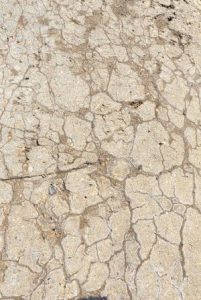 Ice can wreak havoc on both roadways and driveways. To combat the ice, many homeowners and trucks throw salt down to make these paved surfaces safer for cars to travel. However, for roads, sidewalks and driveways that are made of concrete, rock salt can actually cause quite a bit of damage.

Despite concrete looking like a dense, strong material, it actually absorbs water very efficiently. This means that when rock salt is spread on concrete to melt snow and ice, the salt dissolves the snow and creates mushy salt water that can soak into the concrete. If the temperature outside continues to drop afterwards and freezes this water, it will expand as it reverts back to ice, potentially forcing the concrete to crack from the strain of expansion.

Another thing working against the concrete is that salt is also hygroscopic, which is a fancy way of saying that salt naturally attracts. If salt is pulling more water than normal, the concrete could become supersaturated with water, increasing the potential damage concrete if the temperatures drop.

Freshly poured concrete is especially susceptible to damage from rock salt as well. That’s because once concrete is poured, it is still highly saturated with water during the first weeks following the initial curing process. That’s why if you are going to pour concrete late in the year, it’s important to try and time out your project to provide at least 30 days for concrete to set up before winter weather arrives. If not, you flirt with the potential of the water freezing which can cause the top surface layer of the concrete to fall off.

To prevent rock salt from damaging your concrete, try sand instead. It isn’t going to melt the ice, but it will provide better traction for driving on. Plus, clean up in the spring is as simple as hosing off your driveway – no cracking, no damage and no problems!

To order concrete for your next pour, call contact Bergen Mobile Concrete. We’re experts at delivering concrete on time and in the exact amounts that you ordered – no paying for more than you need. To find out more, call us today at 201-797-7550!