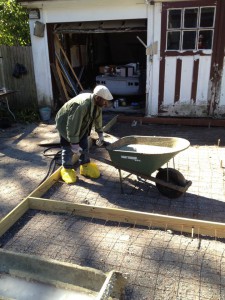 Perhaps the greatest example of concrete architecture in complexity, endurance, and ability to stand without any sort of steel support, is the Roman Pantheon. A gargantuan structure completed in the 2nd century AD, the Pantheon is topped off with a 142-foot dome and has lasted 2,000 years. Contemporary concrete has a warranty tag of only 120 years. And engineers have finally figured out what the key difference between our two recipes is.

One of the key differences between the two recipes is volcanic sand. Rome sits between two volcanic regions, the Alban Hills to the south and Monti Sabatini to the north. Augustus took the title of Emperor in 27 AD and initiated a building campaign that would utilize these readily available resources. Builders began to use Pozzolonic ash from the Alban Hills’ Pozzolone Rosse ash flow in their concrete mix. And the evidence of that choice’s longevity is still one of the great wonders of the world.

Engineers replicated a recipe recorded by Roman architect, Vitruvius, and allowed it to harden for six months. What they found was that the volcanic sand reacted with limestone to create stratlingite crystals, which prevent cracks from forming in finished structures. Another key element to this mix is that it is heated at 900 degrees Celsius rather than 1,450 degrees Celsius, as is the process today. This breakthrough will not only ensure longevity of a structure, but will also significantly decrease the amount of carbon released into the atmosphere during the mixing process.

For more updates on what’s cooking in the concrete world, follow Bergen Mobile Concrete’s blog. And for all of your own concrete needs, contact us today!